Share Tweet Pin Email
New in FULLERTON – An increase in the number of mosquitoes in an area that tested positive for West Nile virus has spurred the county’s vector control agency into action.

This week, workers for Orange County Mosquito and Vector Control District have been spraying pesticides from trucks, passing nearly 4,000 properties, said Lora Young, an agency spokeswoman. One spraying will cover Gilbert and Euclid streets north of Orangethorpe Avenue up to West Valencia Drive, she said. Another spraying will include West Commonwealth and West Malvern avenues, west of North Woods Avenue.

Young said between Aug. 24 and Sept.28, the agency collected 29 mosquito samples that tested positive for West Nile virus, of which 27 were found in the area scheduled to be sprayed Thursday, Oct. 4, through Saturday, Oct. 6. One of two human cases in the city this year is also from this part of Fullerton, she said.

Pesticide applications to curb mosquitoes have caused controversy over the years. In 2015, the district called off aerial spraying efforts after it failed to get a permit to fly over Disneyland. The proposal to spray from the skies caused an uproar among some county residents.

This time, the district will use DeltaGard, a water-based pesticide approved by the Environmental Protection Agency, Young said. The chemical will be applied at a rate of under an ounce per acre, which means the pesticide will be severely diluted, she said. It is considered safe for people and pets, Young said.

Residents were notified through posters in neighborhoods and social media, she said. 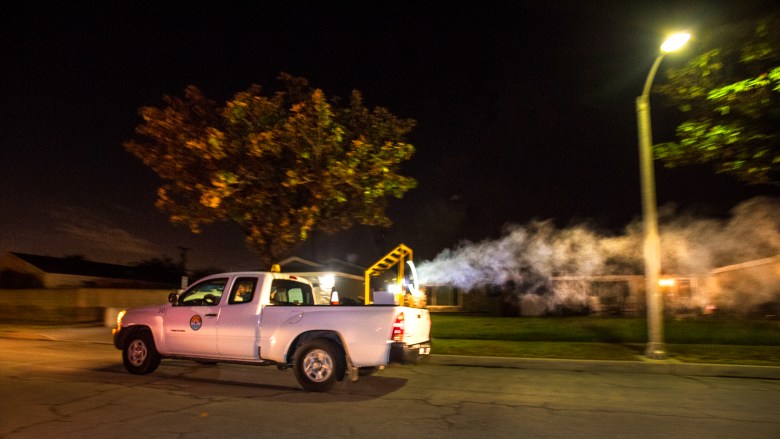 So far, no deaths have been reported in Orange County due to West Nile virus infections. But, Young said mosquitoes have been extremely active in the area that is being sprayed.

“We’re seeing an increase in Aedes mosquitoes as well,” she said. “While they do have the possibility to transmit other diseases, there have been no cases of local transmission.”